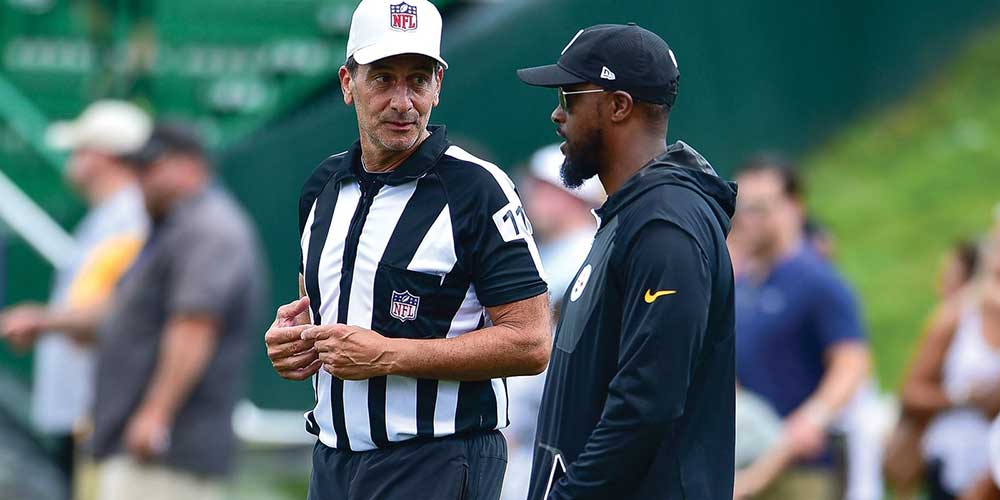 Cal U Alumni fly with the NFL's top team

Neither team's uniforms were Vulcans red and black, but Cal U alumni were part of the action when the Philadelphia Eagles vanquished the New England Patriots in Super Bowl LII.

Football fans nationwide saw NFL referee Gene Steratore '88 announcing rulings on the field at U.S. Bank Stadium in Minneapolis, Minn. And behind the scenes, five Cal U alumni, plus a former instructor, handle front-office duties for the Eagles.

Steratore has been a referee for 12 of his 15 years as an National Football League official. This was his 12th post-season game and his first Super Bowl assignment.

He is the first Cal U graduate to serve as the Super Bowl referee, and the third alumnus to officiate the big game.

Athletics Hall of Fame inductee Dale Hamer '60 was the head linesman for Super Bowl XVII in 1983 and Super Bowl XXII in 1988.

This year's Super Bowl win was a high point in the career of Paul Lancaster '95. He's the Eagles' director of player engagement, the same role he played for 16 years with the Buffalo Bills.

It's Lancaster's job to be an off-the-field mentor for players, preparing them for life in the pro football spotlight and supporting their transition to post-NFL careers.

"Our players did such a phenomenal job," Lancaster says. "For my family and me to go to the Super Bowl my first year here, after not getting a whiff of the playoffs for 16 years, is really beyond words."

Chris Peduzzi, head athletic trainer for the Eagles, has been an instructor for graduate and undergraduate programs in Cal U's Department of Exercise Science and Sport Studies.

"I have been very fortunate to work closely with many of these professionals, and I know how important they are to the success of the Eagles this season," says Dr. Barry McGlumphy, who developed Cal U's online master's degree program in exercise science and health promotion.

Each year McGlumphy also works as an athletic trainer for NFL teams, including several Eagles training camps and some regular-season games.

McGlumphy tracks the success of his program's graduates, who have found work in the NFL, NBA, Major League Baseball, National Hockey League and Major League Soccer, along with countless minor league organizations and intercollegiate teams.

Many still keep in touch.

"As proud as we are of these graduates," McGlumphy says, "they are equally as proud to represent Cal U each day in their pursuit of excellence."