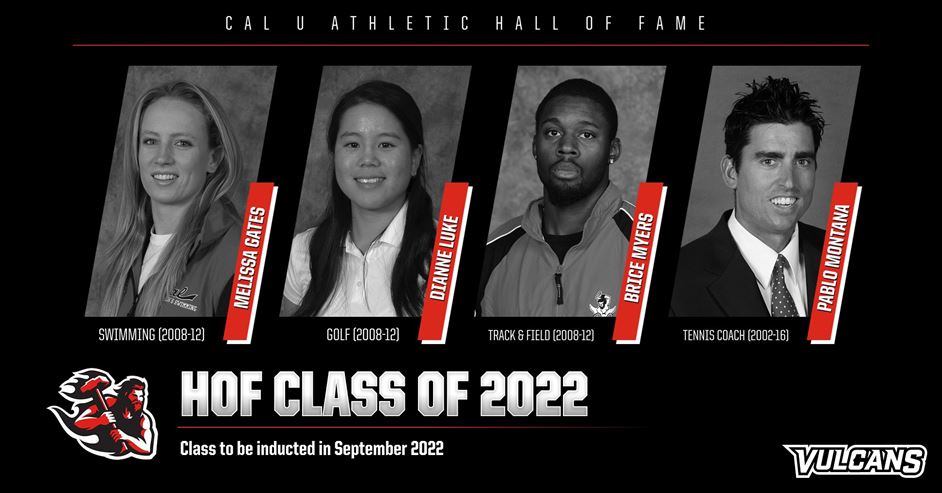 Gates-Rohrer (Leola, Pa./Conestoga Valley) was a three-time NCAA National Champion and a 10-time NCAA All-American for the Cal U swimming team from 2008-2012.

She helped the Vulcans place as high as third at the PSAC Championships three times in her career, the best finish in program history. Rohrer won a combined five league titles (two in the relay) as a senior at the 2012 PSAC Championships and was selected the PSAC Swimmer of the Year. She still holds two all-time conference and three PSAC Championship records set in the 2011-2012 season.

As a junior, Rohrer became the program’s first NCAA National Champion by winning the 50 freestyle before repeating in the event at the 2012 NCAA Championships. She also captured the national title in the 100 freestyle as a senior to become only the second three-time individual NCAA Champion across all sports at Cal U. Rohrer still holds a combined six school records.

Rohrer becomes the first swimmer in school history to be selected for the Cal U Athletic Hall of Fame.

Luke (Sarawak, Malaysia/Saint Columbia) was a two-time WGCA All-American and a two-time PSAC Athlete of the Year for the Cal U women’s golf team from 2008-2012.

She anchored three consecutive PSAC Championship teams from 2008-2010 and helped the Vulcans earn a team qualifier for the NCAA National Championships three times. Luke registered a career scoring average of 78.0 strokes and carded 30 top-10 finishes in her career, including seven at championship events – conference, regional and national.

Luke joins former teammate Simone De Souza (2016) as the only women’s golfers chosen for the Cal U Athletic Hall of Fame.

Myers (Pittsburgh, Pa./McDowell) was a six-time NCAA All-American and a five-time PSAC Champion in the hurdles for the Cal U men’s track and field team from 2008-2012.

He captured the league title in the 110-meter hurdles in three consecutive years, from 2010-2012, becoming only the second athlete in program history to accomplish a “three-peat,” and won back-to-back conference crowns in the 60-meter hurdles in 2010 and 2011. Myers broke the PSAC Championships record in the 110 hurdles as a senior – a record that stood until the 2021 season – and  was chosen the PSAC Track Athlete of the Year twice in his career.

Myers finished among the top four in the hurdles at the NCAA Championships four times in his career. He placed second in the finals of the 110-meter hurdles as a junior before setting the school and all-time PSAC record in the event at the 2012 NCAA Championships, with a time of 13.71 seconds.

He becomes the first hurdler from the track and field programs to be selected for the Cal U Athletic Hall of Fame.

He led the program to 10 consecutive PSAC Championships, from 2007-2016, and 13 appearances in the NCAA Tournament, advancing to the national quarterfinals seven times. Montana guided the Vulcans to a 276-83 record in dual matches for a .769 winning percentage behind six straight 20-win seasons.

Montana was chosen the ITA National Coach of the Year in both 2007 and 2010, and was named PSAC-West Coach of the Year eight times in a span of 12 seasons. He mentored a combined 16 ITA All-Americans, including six singles players, and eight PSAC West Athlete of the Year recipients, highlighted by Cal U Athletic of Fame inductees Inga Chilingaryan (2018) and Helena Van Eysendeyk (2019).

Montana becomes the first women’s tennis head coach to be chosen for the Cal U Athletic Hall of Fame.

In addition to the inductees, Cal U will be recognizing the silver anniversary of individuals and teams from the 1996-1997 campaign during Hall of Fame festivities. Honorees include the 1997 NCAA National Championship softball team, which featured six Cal U Athletic Hall of Fame inductees and was led by current head coach Rick Bertagnolli.

This spring, Cal U will be recognizing its Athletic Hall of Fame selections from the Class of 2020 and Class of 2021 on April 23, 2022, at an event in the Natali Student Center. The traditional induction ceremonies for both classes were postponed because of the pandemic.

More information about the Hall of Fame events will be made available at calvulcans.com.