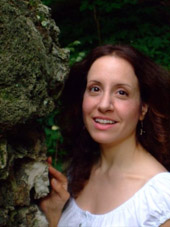 DeFazio came to Cal U in 1997. She is a Pittsburgh-based artist who primarily sculpts and draws large-scale works, often for public spaces. Her primary media for these works are stone or cast cement, while her drawing and smaller scale sculptures incorporate architecture and a wide variety of media.

DeFazio has been very active in the Pittsburgh art scene for many years, and has served on the board of directors of the Society of Sculptors. She has won several awards and curated many regional exhibitions, including one of the largest exhibitions of the 19th International Sculpture Conference. In addition to creating her own work, DeFazio has worked hard to give back to the community by creating opportunities for her own students as well as those in the regional area to exhibit their work and become active members of their communities as well.

In 2008, her art installation at Ohiopyle was unveiled. Four boulders were installed at the site, and DeFazio carved images of Pennsylvania wildlife into the rock to represent earth, air, wind, fire and water. In 2004, she created the blueprint for a Cal U "cow," made of fiberglass, which became part of the Harrisburg CowParade and was brought to "life" by Cal U art students.