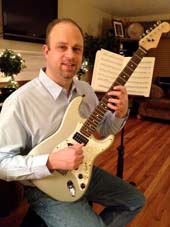 Joseph ‘Jay' Weaver is a guitarist who is originally from Cumberland, Md. Jay had been earning a B.A. degree in music from Shepherd University as well as performing in the mid-atlantic region before moving to Pittsburgh, Pa., to obtain a Master of Music degree in guitar from Duquesne University.

Since moving to Pittsburgh, Jay has continued to work throughout the United States with many local and national acts as a freelance guitarist and/or sound engineer.

Also, Jay has extensive teaching experience. He has been a private music instructor for 25 years, taught college classes in guitar for many years, and was the assistant director of the internationally known Duquesne Guitar and Bass Workshop. Jay is currently working on a guitar instruction book titled: “The Eight Tools to Becoming a Great Guitar Player.”